I always liked to spend time with my dad in his electrical workshop. He is a radio engineer and built several robots with blinking LEDs for me. He hoped that I would get into engineering too. But I kind of never did, the robots he built were awesome, but I wasn’t interested in the soldering part.

After beginning my game design courses at university I started to love programming. My dad saw his second chance and built a spider robot powered by a Pololu Mini Maestro 24 channel microcontroller for me. I was hyped. But too inexperienced to get a robot with six legs (total of 18 servos) to stand up or even walk. I packed it away in the hope I could get back to it when I was more experienced. 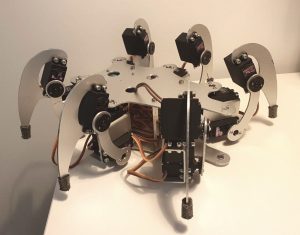 The spider robot my dad built for me.

I know it’s technically not a spider because

it has only 6 legs but I like to call it spider. 🙂

Return of the Spider

A few weeks before this post I found the box with the spider robot and thought to myself:

Now you know how to code, let’s get this robot walking!

The robot is now able to stand up and sit down again. I mainly code in the high-level language C# in Unity and realised that there is a huge difference to low-level languages like Basic. It’s a whole new world if you have to manually construct bytes and send them to the servos to get them to do anything. It’s not like you could just call Servo.Move(degrees).

I have enough coding experience to know that I wound get anywhere if I start with a complex robot before knowing the basics of embedded system programming.

I started my journey by listening to the EMBEDDED.fm podcast to get an idea of what I’m getting myself into. I liked the podcast and bought the book of the host Making Embedded Systems by Elecia White. It’s a really good book for beginners and I can recommend it if you know how to code and want to get into embedded systems. I don’t think it’s a good entry if you have no programming experience.

My dad got me a Super StarterKit UNO R3 Project for my birthday. I’m now learning embedded systems by starting at the basics, blinking lights.

And it’s a lot of fun 😀 Maybe I will post a few of my Arduino scripts in the future.